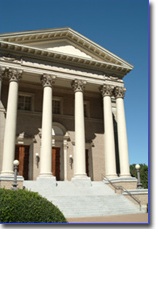 First Church of Christ, Scientist, Atlanta is considered one of the major landmarks in the Midtown area. Built in the classical revival style, it is regarded by Atlanta Magazine (December, 1982) as “the best example of neo-classical style in the city.”

The establishment of Christian Science in Atlanta was the direct result of the healing work accomplished by Mary Baker Eddy, the discoverer and founder of Christian Science, and her early students. In 1886, Mrs. Eddy sent Miss Julia Bartlett to Atlanta to teach Christian Science and take patients for healing. She was called upon by Mrs. Sue Harper Mims, a leading figure in Atlanta social life and wife of future Mayor Livingston Mims of Atlanta. Under Miss Bartlett’s care, Mrs. Mims experienced the complete and permanent healing of a long-standing physical ailment.

Mrs. Mims’ healing led to meetings in the Mims’ home at the corner of Peachtree and Ponce de Leon Avenue, currently the site of the Georgian Terrace Hotel.

The group outgrew several subsequent locations before moving to its current building designed by noted architect, Arthur Neal Robinson, a member of the church. The cornerstone was laid on June 13, 1913, and construction was completed in July 1914. Architectural excellence is seen in the building’s proportion, intricate brickwork and masonry detail, Corinthian columns, curving interior staircases and arches. It has been said that the beauty of the church exterior made every brick mason in the area want to claim having worked on the building which, if true, would mean that no one mason could have laid more than 12 to 15 bricks apiece.

The music emanating from the four manual Moller organ, which was entirely rebuilt in 1984, completes the excellence of the building.

First Church has the distinction of having been the first air-conditioned building in Atlanta. This was accomplished by building large air passages directly under the floor of the main auditorium. Huge blocks of ice were placed in these passages, and large fans blew air over the ice into the air ducts in the auditorium to cool the space.

In 1984, the church was completely renovated to bring the building up to codes and standards of the day.

The church’s Administration Building at 150 Fifteenth Street was built in the early years of the 20th century as a private home, was purchased by the church in 1950 to house various administration offices, and now also houses the Reading Room and the Children’s Room.